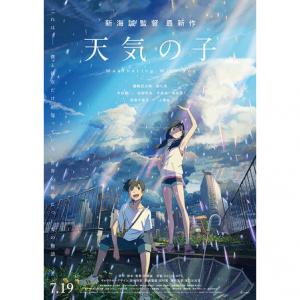 Not good as Kimi no na wa

Tenki no Ko is not surprising in the way it should and in addition to ending the shine of the director's previous film, it is full of forcing the script and emotions that do not exist.

The script follows Hodaka, a young man who moves to Tokyo and there meets the second main protagonist of the film Hina, with them the story develops and creates the main plot of the film.
The story has a slightly interesting plot, but is lost in the middle of the film. The script begins to not know where it is going and forces impossible outings for the characters in order to be able to complete a story that was already lost.
The characters themselves are good, the protagonists are in line, they really seem to like each other. The secondary characters are also good, they almost always work as comical tools, but they are still worth screen time, I found myself thinking about the time that they would return to the scene several times during the film.
In short, the story becomes predictable, even if it is confusing, it is a paradox, since confusing things should be difficult to understand, but this is because the narrative mechanisms are predictable.
About the expansion of the kimi no na wa universe, the film insists on ruining the brightness of its predecessor. All the mystery, romance, charisma and magic surrounding Taki and Mitsuha's relationship has been shattered, as the film implies that they are no longer a couple.

The animation of the film as expected is wonderful, a visual spectacle, well used CGI and precise direction in almost the entire film, almost all, because the director really forced too wide open angles of Tokyo, because of his fissure in wanting to give greatness to the film, it didn't work, it got tired, it ended up showing more errors in design than it should. Vehicles were very much in the face that they were made of computer graphics, something that did not happen in kimi no na wa. Other than that, the director still manages to deliver well-directed scenes, especially dramatic ones, whether they are fighting, crying or arguing.

The design is also jaw-dropping, shadows well made, colors very vivid and at the same time dead, which makes the hyper realistic scenario even better. Anatomy errors as expected, I found none, not even in very busy scenes, merit.
The scenarios are, as always, beautiful, the hyper realism of Makoto is splendid, the CGI used in the scenarios shows that just like jumpscares in horror films, one must use the mechanisms as a tool, not the main theme of the work.

The music is disappointing. In view of the masterpiece that Radwimps did on Kimi no na wa, I expected at least some striking music, however, besides being premeditated, they are not striking. The compositions themselves, seem to be of quality, but it did not match the film and the exaggeration of literary compositions hindered their absorption, one song ends up standing out on top of the other and ends up that none remains on the head. Unlike the other film, which after 4 years, it is still possible to imagine the scenes that touch the compositions in the film, because they are striking and well placed. Instrumental compositions, on the other hand, are good, very calm and ashamed. They don't show up often and when they do they don't last long.
The sound mix is ​​great and inaccurate, the placement of the songs does not match, we are objects of scenery and the world is perfect, sounds of rain, wind, cars are all immersive and beautiful.

Dubbing is good, but it has its flaws. The main characters mostly deliver a good and convincing voice work, the secondary ones end up shining more, because of their personalities, her freedom for the actor to be more natural with the character. The protagonists, on the other hand, seem to follow a cliché of romantic scripts, they are characters that normally do not impress in dubbing. Overall it works.

The film is nowhere near the quality of its predecessor, particularly I think it's just another number for the anime I've seen. I don't regret it, but I won't remember it in 4 years.