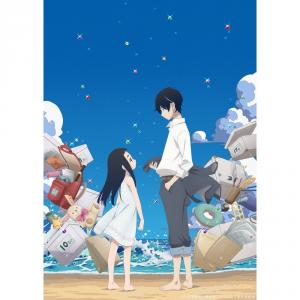 The anime's story is simple. The plot accompanies Goto and his daughter Hime during their daily life as father and daughter, the difference is the fact that the father hides that he draws manga from his daughters. The story floor is filled with funny moments completed by time jumps that prepare the anime for its ending. The narrative construction for the end of the anime is organic and well done, the temporal part that accompanies Goto hiding the secret is very characteristic of the manga creator of the series, this is noticeable in the well-placed jokes and irony.
The characters are all good and funny, the plot manages to explore more layers of the secondary characters putting them to act opposite the protagonist, thus showing the appreciation they feel for the same. The relationship between father and daughter that moves the anime works exceptionally.

Animation is another characteristic feature of anime, no exaggeration of frames and long facial expressions with closed take. The anime shines in its simple way of animating, very reminiscent of the previous work of the author Sayounara Zetsubou Sensei, which by the way is another super unique anime by the author. The direction does a good job in the angles and cuts, the style chosen by the author of the original material is difficult to direct, needing a quick hand in the direction, to have fast and fluid takes at the same time.
As expected, the final episode has an epic animation. The protagonist's final act of effort towards her father is directed with beautiful success.

The design surprises in its beautiful scenarios and designed in an eccentric way, it is not enough to be a Monogatari or Sangatsu no Lion in creativity, however it still deserves its merits, it is a beautiful setting. The character design is identical to that of Sayounara Zetsubou Sensei, it is unique, it can please or not, it is what we call roller coaster design, some give 10 for creativity, others not for finding it simple or simply not adapting.
Anatomy errors are nil.

The music of the anime is the point that I particularly expected most because it is the same songwriter from Sangatsu no Lion. The compositions are very shy, appear in very select moments, but when they appear it is usually to touch the conscience and mark the scene. Again, they are not exciting compositions to the point of characterizing the work, but they are effective in terms of not leaving the anime in need. The sound mix is ​​functional, there is nothing impressive, but there are no errors in the placement and mix of sounds that I have noticed. The theme of the anime is brilliant, besides marking the anime is the type of music that characterizes a work.

The dubbing of the anime is effective and well done, all the actors are funny. The protagonist's voice work is exceptional and stands out, but that does not overshadow the rest of the entire cast. Great voice work.