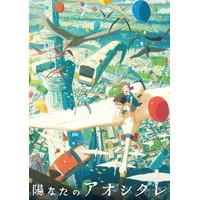 Here we have the physical proof that it is possible to create good characters in a 17-minute anime.
The * story * is basic, almost non-existent, what we have is the development of the "relationship of protagonists" development that is cute and cute. Really interesting. The characters are cool, the protagonist is charismatic for being clumsy, cliché? Yeah, but it's still really cool. Already on the girl can not say the same, it turns out that it is only a goal for the protagonist, even taking a minimum focus in the end. Having this in mind has no justification for taifuu in the naruda is so bad, he had even more time to develop. A separate point to be commented on is the comic relief, a very funny anime, the protagonist's mishaps that cut the mood of the scene is not a bad thing.
The * animation * is good, especially during the apex in the middle of the movie. Clearly a scene with a lot of effort applied, not only by the amount of frames used, but also by the variety of cuts and being these cuts well done. Expected for a film with simple, childlike design and 17 minutes in length. It is worth emphasizing on the sequence scene that we have during and after the apex in the half of the anime, not only by the music but the scene itself is great. Several well-explored cuts, good animation, good visual effects, and voice acting were cool. An interesting point in this film is the transition from the fantastic world of the protagonist's mind to the real world, this makes the anime unique and the scene itself unique as well.
* Design * is beautiful, like any colorful studio anime. But they are all the same, the only variation worthy of credits is us scenarios and visual effects, really beautiful scenarios. Character pattern design colorful, nothing too much, not ugly, but it is a nuisance standard.
The * music * is cool. Cool comps, you really feel the light mood of the anime with them. But here in this anime we see yet another example that adding literary music is not necessarily a good thing. The literary music itself is good, but it does not have the necessary transition for it. Mixing sound okay.
The * dubbing * is cool. The protagonist has scenes with very interesting shouts, but only he has highlight.
Great movie. Simple story simple yet cute characters cute and visually cute. Watch it, it will be the best 17 minutes of your day.