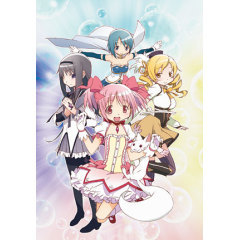 After reviewing this beautiful work I come to the conclusion that it is an anime that knows how to arouse curiosity about themes we have always been curious about.

The anime story in principle is basic, magical girls fighting witches to protect a city. However, as the plot unfolds the anime can explore deep themes such as why reason is needed as much as emotion is needed, the harmony of these factors is necessary for the creation and development of a functional humanity. As seen throughout the philosophical history of our humanity, pre-Socratic philosophers were not wholly focused on reason, paraphrasing Nietzsche on Socrates, from the moment we exclude emotion and just stay with reason, philosophy dies. To talk about how anime explores this would be to deliver a bit of plot, but anime is above all a spectacular animation as well. The characters are exceptional, each of the characters has their purpose dictated from the beginning of the work, and all of this is clearly explained satisfactorily, but not simply at the end and exorbitant conclusion of the work.

The animation is impeccable, as usual Shaft delivers another spectacularly technical anime. The director can explore very well the whole universe made in the anime. The way in which it was decided to express impossible things to express is to be impressed.
The choreography and visual effects are beautiful, the whole spinning apparatus used in the fights makes them breathtaking.
The anime has errors that can be counted on the finger. With the director's impeccable direction it is ironic to think that the only problem in this aspect of the work is a simple problem to correct. However, great animation and direction.

The design is beautiful, it's kind of redundant to compliment Shaft's anime design, but as I should look at them too, good character design is good, has no anatomical errors, is varied, cohesive and charismatic.
The scenarios are totally inspired by Monogatari and Arakawa, but it is better than Arakawa and it is debatable whether it is better explored or not than Monogatari in terms of scenery.
Exceptional.

The anime music is beautiful. The literate compositions with melancholic and harmonic tones very inspired by compositions of the Baroque genre, these compositions goose bumps. But beyond all this opera choir, the anime features great composers for instrumental music as well. All the soundtrack work is great.
The sound mixing is frighteningly well done, considering all the anime action was expected some slips in this part, however they do not occur and this is my second time watching the anime.